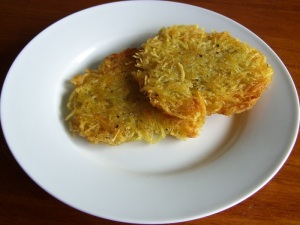 I’m not really sure if it’s the right time to post this recipe. I think the recipe’s good, but my technique is not quite there yet. I made these the other night, but forgot I’d used my oil and ended up having to cook them in peanut oil. (I probably wouldn’t have normally picked that in particular.) As a result I didn’t quite get the golden-brown finish I would have liked. They’re still good and crispy though. Anyway, I’ll put the recipe out there and reserve the right to tweak it and upload photos later on. (UPDATE: photo uploaded from subsequent attempt.)

There’s two basic types of hash brown – the pure hash brown and the embellished one. The first is simply grated potato, seasoned with salt and pepper, fried in a little oil. The second might contain eggs (which help hold everything together), onions, garlic, bacon etc. This post is all about the pure version.

The key thing for a good crispy hash brown is to get as much moisture out of the grated potatoes as possible. There are a few different ways to achieve this, how you do it will really come down to personal preference and what you’ve got available. Just as indication, the potatoes I used went from weighing 600g immediately after grating, to weighing about 400g with the moisture extracted. (And it’s possible I could have got more out.)